The best part about doing a Mystery Quilt is putting that first block together from all those bits and pieces that you have been cutting and piecing.  I was really anticipating the Grassy Creek block, as I had abandoned the suggested colors, which I do not normally do.  I had found a large piece of a print in my sewing room, enough to cover the “gray” in the pattern.  I decided to use that for inspiration and pull the colors out of it for the other colors, all of which I had enough in my stash to do.  I love all of Bonnie Hunter’s quilts, but I really felt the need to “thin my herd” and use what I already had.  I knew it was a risk, but I went for it.   And I love it!   I did make one change after sewing the block and looking at it for a while.  I had cut centers for all of the blocks from the same dark purple fabric.  Once it was surrounded by all of the other bright colors, it read brown.  Initially my thought was “Oh, well.”  But the more I looked at it, the more I realized that that was always going to bug me, and it was better to make the change now, that after sewing all the blocks.  (That is my criteria for ripping out and changing.  Will it always bother me?  Or will I forget about it once all the other are put together?)  I carefully ripped that center out and replaced it with another fabric that I like much better, even though it reads blue when it is actually purple.  LOL.

During the first few clues of the mystery, I only made five sets of each part, so now I am playing catch up.  I assembled all five of the center Ohio Star blocks with the five sets I had pieced, and now am working on the hourglasses for the rest of the quilt.  They are all cut and most have the first lines of piecing done, ready to turn into hourglasses. 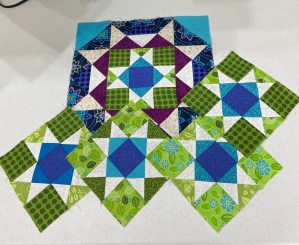 The clues will remain on the Quiltville website through February 11 for free.   After that it will disappear for awhile and come back as a “for sale” pattern, so if you think you want to try this quilt, I recommend you download the clues now.  I have learned so much from these mysteries.

One of the things I have learned from following Bonnie Hunter is the concept of leaders and enders.  You can learn about those here.  I am doing this making my hourglasses, using the smaller triangle pieces as my leaders and enders, while assembling the hourglasses.  Maybe the picture will make more sense. 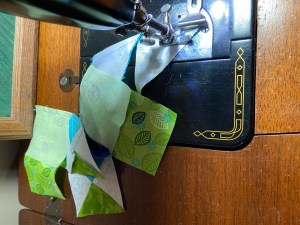 I need to get back to my sewing machine.  Create some peace and happiness in your life today!